2011.December.30 » Alfred Hitchcock is considered a master filmmaker by master filmmakers. The meticulous storyboard planning he invested in each shot is famous for yielding a remarkable economy of narrative.

An effect I admire, cuz I constantly strive for economy-of-narrative myself, artistically as possible, in writing. Writing for the Web is very much about economy (.. as is programming). Saying much with few words.

Tho unlike Alfred, I dont plan very much. Got the idea, for example, for this-here entry just today. Trying to keep it organic. 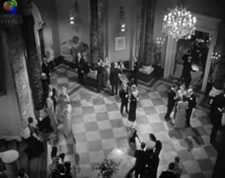 Regulars might recall how, back when I was dating Wendy, the Film school student, I accompanied her to many graduate classes at USC (.. perhaps the world's finest Film school).

When I was there, Drew Casper held the Hitchcock chair. I sat in on some of his Hitchcock classes. High energy. Entertainingly confrontational.

Anyway, one of Hitchcock's most famous scenes came during the filming of » Notorious. An excerpt from the Wikipedia entry (3rd paragraph):

The film is known for two scenes in particular. In one of his most famous shots, Hitchcock starts high and wide on a second floor balcony overlooking the great hall of a grand mansion.

Slowly he tracks down and in on Ingrid Bergman, finally ending with a tight close-up of a KEY tucked in her hand. So arresting is the shot that an outline of the KEY became a graphic element in the film's promotional material.

Key word » arresting. The scene is posted » here (40 secs). You neednt be a film critic to understand this KEY will play a crucial part in the story. 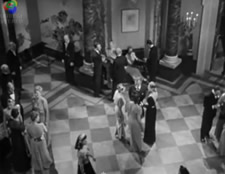 » A Week of Holiday Pause

I'll return to Hitchcock and his famous shot later, but first, let's shift gears and let me wish you a happy & prosperous New Year.

The week between Christmas & New Years always feels like the world is on pause.

Have you noticed how much faster the other 51 weeks seem to be moving since the quantum leap in Connectivity (.. advent of Web + Celluar)?

Next stop » 2012. That's right, dawg.. the year about which more modern movies have been made.

While it's fun to joke about 2012 as being the long-prophesied Apocalyptic year .. I suspect there's a hint of nervous laughter behind much of that kidding. It's not like we need Hollywood or some ancient calendar to make us feel as tho the world is starting to come apart .. like the wheels are starting to come off.

Things do feel wobbly out there. And not just here in the States either, but the world over. People everywhere are pissed. Pissed off cuz they feel pissed on. 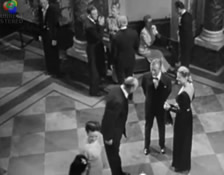 No, I dont expect to see a tsunami come crashing over the mountains, but I will be keeping out a wary eye for the unexpected. Those who have expected the unexpected, specially these last few years, have not been disappointed.

So even without the Mayan calendar or the Hollywood dramatization there's an underlying sense of unease and apprehension about the coming new year.

Certainly a major source of this anxiety comes from » the economy. Europe seems to have a new crisis every week while we here in the States are still trying to recover from the economic meltdown of 2008.

Many pundits claim that nothing structural has really changed, except that Too-Big-to-Fail banks are now even bigger and our national debt is exploding.

The housing market would dry up and blow away without government support. Meanwhile, Fannie & Freddie, now in government conservatorship, continue to require injections of billions of taxpayer dollars on a predictably regular basis. 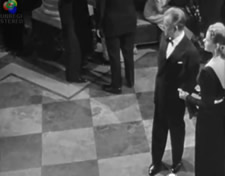 I am no Economist. Tho I did have an Economics class in college (Macro). But our nation's economic trajectory is so depressing that I tend to avoid the subject. (Like most people, I have plenty of distressing stuff to deal with already.)

By pure chance (coincidence) I happened to take both Economics & Sociology during the same semester .. the only two courses I took that semester (.. while working full time). Economics on Wednesday night (7-to-10), Sociology on Thursday.

And I learned that the economic system controls and defines the social system. Communism, for example, is both an economic and a social system. Same goes for Capitalism.

The two are linked .. the economic and social systems .. in ways that were not apparent when I signed up for the classes.

You cant separate one from the other. In America, money (capital), more than any other thing, defines our social status, our class. You are your bank account, your net worth.

The more wealth a person possesses, the more highly our society esteems him. The fabulously rich are revered, almost worshipped. Rich crooks are esteemed more highly than poor saints. Much more.

This inherent, systemic elevation of money as the principle thing in our Capitalistic culture speaks volumes about the values promoted by our society .. by our very cukture .. implicitly suggesting that money is even more important than than things such as right & truth & honor.

Money .. but at what cost? The ends always justify the means. (Or maybe it just appears that way.) Capitalism could just as easily be called Moneyism .. were that moniker not so obviously unflattering.

Major food for thought while driving home each night (.. after first stopping by In-n-Out, a fast-food bastion known for its Capitalist burgers).

And yes, it would've been nice, very nice, if my folks could've paid my way thru college, like many of my friends' parents did for them. Or at least chipped in a little.

Then maybe I wouldnt've had to hold down a full-time job, and it wouldnt have taken me 10 years to get my degree, taking a course here and a course there. But things dont always work out the way we'd like.

Nevertheless, on the eve of 2012, and in the shadow of its looming implications, I've done a little research .. to bring myself up to speed .. to try-n-wrap my head around the problems our economy faces. I'm talking » big picture stuff. Ballpark perspective. 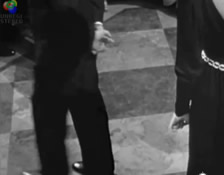 There's actually an entertaining rap video (10 mins) that compares and contrasts their differing views/theories on the best ways to implement governmental policies in order to foster economic growth.

Break out the headphones. Plug 'em in and turn it up.

Even better tho, are the three videos (by Lawrence White) that EXPOUND on the Hayek side of the rap video:

[ That's right, dawg. Everything I know about Economics I learned from a rap video. =) ]

2011.December.05 » From the moment it started hurting, I knew that tooth wasnt going to get better on its own. Dont know how I knew, but I knew. A distinct calm knowing (intuition?) accompanied the initial pain. 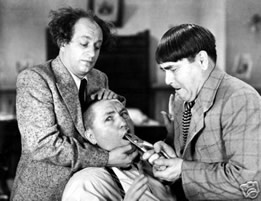 Denial however, is a powerful thing. So I waited a week, enduring the "discomfort" (.. to put it mildly). Hoping against hope, praying. Living on Advil & aspirin.

Havent been to a dentist in .. a long time. Very long. Daredevil long.

Top-right-back tooth. I think they called it "#2".

When I could stand it no longer, I broke out the yellow pages and employed my vindicated intuition to select a dentist.

"I got a tooth," I said, "that's been bothering me a week. Doesnt seem to be getting any better. I have a fever, too. So I think it's infected."

"You better come in," she said, "and let the doctor look at it. We only have one opening today. At noon."

"I dont have much money," I said, before confirming, trying to camouflage the embarrassment.

"Dont worry about that," she said. "Just come on in and we'll work something out."

Fortunately, the bad tooth had some gold in it (fancy inlay/outlay), so I figured, if worse came to worst, I could use that gold to help pay my bill.

I was slightly relieved and actually encouraged that, when he looked in my mouth, the dentist didnt jerk back and say, "Holy Jesus!" or "Mother of God!"

"He only does that with the meth addicts," said the dental assistant, when the doc stepped out for a minute. She was very nice and good at settling me down. I trusted her.

"Well, you have a few problems here," the Doc said. "But let's take care of this one that's bothering you right now. And we'll worry about the rest later." 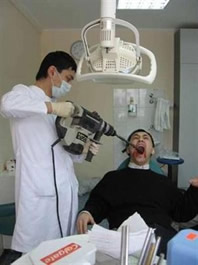 Out came the drill. You know that lovely sound. That high-pitched whir that sounds like no other sound anywhere on god's green earth.

He novacained me up nicely and I felt no pain. But I could tell he was doing some serious drilling. I could even smell something burning .. which I guessed was my tooth.

During one of his breaks, my tongue probed the problem tooth and explored what seemed like a gigantic hole he was drilling.

They (the Doc & his Assistant) were making conversation between themselves, about very boring mundane stuff. But I was thankful for this, because it helped take my mind off that horrible drilling sound.

I even chuckled at some of their sillier comments. Not easy to chuckle with a drill and a suction tube sticking out of your mouth.

She tried to get him to do extra work on an adjacent tooth, but he said, "Let's just take care of this one right now, and worry about the other later."