2012.May.15 » As mentioned in my New Year's eve entry, which represents an attempt by a concerned citizen-parent to wrap his head around the incomprehensible and portray the problems plaguing the future of our nation's economy » I am no Economist. But .. 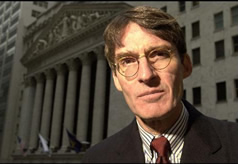 Geeks vs the Government | Game On

.. I'm starting to see articles (posted by professionals) that appear to echo points I made ..

.. about our economy being "heavily-medicated" .. for an increasingly troubling length of time ..

.. such as » THIS ONE, posted by Bloomberg, which references an interview conducted with the erudite James Grant .. who uses the term » over-medicated ..

.. while he was discussing the government's response to the recession of 1920 that helped shorten its duration.

Probably just a coincidence. New Years eve, you might recall, is when I wrote »

"A little medicine can be a good thing. A great thing, even. But when the medication NEEDS TO CONTINUE .. over an extended period .. that's a bad sign. Because, IF IT CONTINUES .. the road (in my experience) always leads to » death."

IF you followed my line of reasoning in that entry ~ ..

.. posted 4½ months ago, and which was intended to be a fresh look at our nation's storied economic problems .. with eyes that have not been academically indoctrinated ..

.. by the acceptance of predefined concepts .. which can lead to predefined (within-the-academic-box) thinking .. and result in predictable, but inaccurate conclusions. (See t=8:20 here for an example of what I mean.)

So I come from a very different background, which gives me a decidedly different perspective .. than the regular commentators you normally hear discussing the economy ..

.. and especially since readers claim I have a knack for discussing sophisticated concepts in ways that ordinary folk can easily understand .. breaking it down into easy-to-chew bite-sized morsels (.. cuz that's how I like to chew them myself) ..

.. ~ THEN you know that the "long-term heavily-medicated patient" was my own concocted analogy .. for the State-of-our-Economy, based on my own Life Experiences.

It was an intuitive analogy .. one that I wasnt even sure was valid, which is why I included copious hyperlinks .. to identify & support the basis for my concepts. [ Regulars know how I strive for the authenticity that comes only from original thought. ]

Not that I would ever complain about a professional taking up where I left off. Especially not one who wears a bow tie and might become our next Chairman of the Federal Reserve. =) 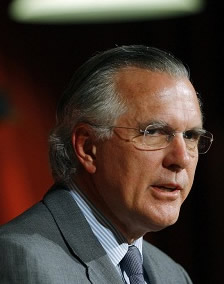 Speaking of the Federal Reserve .. here's another article you should see .. which helps make my point. It contains a comment from the President of the Dallas Federal Reserve Bank, Richard Fisher, who says (paragraph 6):

"Adding to the accommodative doses we have [already] applied, rather than beginning to wean the patient, might be the equivalent of medical malpractice."

Here's one more .. again, from my good buddy Rich over at the Dallas Fed:

I added the bold-type. If nothing else, this confirms the validity of my analogy .. according to people who would certainly know. And you must admit, his comments are very clear. No need to guess or hire a double-speak interpreter.

It's no big deal (NBD) .. but, uh, I have not been able to find any articles that reference the use of an analogy that is anything similar to one that compares our economy to that of a "long-term heavily-medicated patient" .. posted PRIOR TO the New Year.

The first was that Bloomberg article, quoting James Grant, which surprised me. It is dated February 14, 2012 (Valentines day). The articles quoting Richard Fisher are dated March 5, and March 22, both 2012.

No mere mortal can guarantee that they're always accurate, but I *do* try to think for myself and retain an element of healthy skepticism when it comes to widely-held beliefs ..

.. which is something we ALL need to do a little more often .. cuz the current thinking obviously isnt working very well .. especially not for our kids .. as many seem to agree. 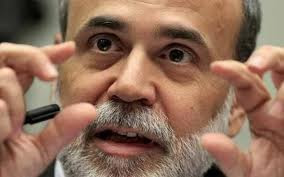 The Oracle & the Iceberg

But, wait! There's more! Cuz New Years eve is when I also said:

"So .. when I look out over the valley that is 2012, what do I see? You should hope I have no prophetic gift .. because I see it getting ugly, or I see it getting worse .. just below the layer of FOG sitting there."

And smack dab between Grant's Valentines day comment and Richard's the very next month came one on Feb 29 [ leap year day ] from Bernanke himself ..

.. who happens to be the closest thing we have to an Economic oracle .. who warned Congress about a "massive fiscal cliff" coming on January 1st, 2013 (.. now 7½ months away).

The phrase "fiscal cliff" is a term that some people interpret to mean "disaster" .. cuz, uh, that's what usually happens when you walk off a cliff. (And you know what they say about 13 being an unlucky number.)

Instant recession. Just add water. Political water. As the politically independent CBO confirms. So our leaders can't claim that they didnt see it coming .. like they did last time.

And some economists think things might start getting squirrely well BEFORE January 1st .. amid "uncertainties" surrounding the rapidly approaching precipice. Fear of the unknown. (See t=2:45 here.) 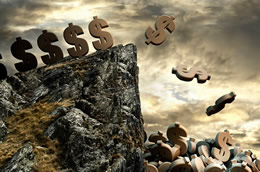 Other prominent economists think that the effects of the Fiscal Cliff could be WORSE than many anticipate.

This article, for example, by an economist at BoA is titled » "Fiscal Cliff May Make Europe Look Like a Dip."

I said VALLEY. Ben said CLIFF. Coincidence? (You can easily see the date on the Bernanke article.)

Either way, you must admit » Ben does look a little scared, and his choice of words there is surprising .. uncharacteristically alarmist for one of our economy's biggest cheerleaders.

Like me, Ben is also using geographical terrain as a METAPHOR for the future of our nation's economy .. tho my view also includes the SOCIAL ramifications. Because, while many Economists ignore them, the two cant be separated.

Now I will concede that a VALLEY may or may not be bordered by a steep CLIFF (.. perhaps a gentle slope).

But clearly, Ben is talking about a particular type of cliff .. one that proceeds from » high ground to low .. just like the view taken in of my valley .. that I "look out over" (.. and not up from below). In other words, neither one of us are talking about the kind of cliff that you climb.

[ As if the Fiscal Cliff werent bad enough, Goldman Chief Economist Jan Hatzius is now predicting a "Monetary Cliff" to accompany our Fiscal Cliff. (You can't make up this stuff, folks.) ]

It wasnt long before everybody standing on the Fiscal Deck of the USS Economy in the thick forecasting fog that frigid leapyear night said, "Cliff? Yikes! Iceberg! Dead ahead! Sound the alarm! Admiral Ben said it's massive!"

[ Cant you almost hear the music playing in the background? .. where the rich survived and the poor died .. in the freezing-cold waters of the North Atlantic on the night of April 15, 1912, exactly 100 years & 1 month ago ..

.. cuz there were not enough lifeboat$ to save everybody .. as the unsinkable sank. ] 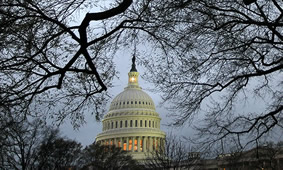 We have already seen what our leaders are capable of (.. or should I say incapable of) .. during the last raising of the debt-ceiling.

And guess when the next round of debt-ceiling dialogue will be? [ Pause for effect. ]

That's right .. I shit you not. It could NOT come at a worse time. Like a perfect storm, it will coincide perfectly with Admiral Ben's fiscal precipice .. uh, I mean cliff.

Some claim we might even reach the debt limit (ceiling) BEFORE election day. Talk about an October surprise.

I must admit, you guys are certainly very good at keeping things interesting for John Q. My toes tingle nearly all the time. Lively.

Does it not seem that our nation's economic problems are starting to become more POLITICAL than economic?

At the ugly end of our political Bell Curve, there's no telling how nasty things could get.

Here's how you'll know when our Economic problems have morphed into a Political problem » when the economy starts to suffer as a result of political dysfunction. For example, one economist says here (10th paragraph):

"The cliff is likely to hurt growth this year as much as next year. By risking a recession-sized fiscal contraction and then offering no guidance to how it will be resolved, politicians are creating a major uncertainty shock."

Regarding a solution to our current situation (.. which he terms a "Depression") Krugman says at t=1:20 here » "The economics is actually quite easy. It's only politics that stands in the way." [ And he doesnt stutter. ]

I would contend that day has arrived. Because our dysfunctional political system looks UNFIXABLE. Or are you seeing something I'm not?

Am I the only one who feels a little uneasy about our government's ability to deal with unconventional challenges? I think not.

I do not know what would become of global financial markets, but I suspect the mere specter of a United States default would be most unsettling.

This might be a good place to mention that .. it has become clear .. that Wall Street's financial wizards are much smarter, craftier & dedicated than Washington's regulators ..

Incompetent or bought off? Does it matter? Which would be worse? Meanwhile, Wall Street has figured out how to flourish regardless which administration takes office. Because they own both parties.

Your buddies at Wall Street damn near flush the whole economy down the pooper .. and you cant find a single thing wrong? "Looks kosher to me." Actions speak louder.

Yet let somebody tell a few of your secrets and you're suddenly all up in arms. So you can see why we feel your priorities are outta whack with reality .. like you're looking for love in all the wrong places.

Regarding your secrets .. we're living in the Information Age. Remember? Don't worry, you'll get used to it. It takes everybody a while.

As Steven Aftergood says: "Secrecy cloaks not only the operations, but their justification and rationale, which are legitimate subjects of public interest" .. for affairs that you guys are doing in the name of the American people.

I know it seems hard to believe .. but even after we drop off Ben's "massive fiscal cliff," the nation will STILL be running massive fiscal deficits.

See this video (at end of article) at t=9:15 to hear the Chairman discuss the Fiscal Cliff with members of Congress. Watch his lips at t=10:40.