2013.March.31 » I have a special treat today. For me! Today I share a few of my most favorite parenting memories. Vignettes of early fatherhood that I've never shared before. Some of my most precious memories. Places I go when I'm missing the Bug.

Since Newtown, and especially after seeing those photos of Peter's newborn son .. I've been thinking ..

.. about the preciousness of little children. The innocence. (The most fragile of graces.)

My first precious parenting memory that I'd like to share today comes from the time when the Bug was very small. I'm not sure .. maybe 2 years old.

It was the middle-of-the-night .. when we were living back at the old house. (What an enchanted place that was. A safe haven for us. A sanctuary. A quiet, protected sanctuary.)

I remember being very tired when I heard him stir (.. sleeping there beside me).

It was dark, very dark .. and I was facing the other way .. in the process of summoning the strength to turn and see what he was doing ..

.. when I felt his hand light on my face .. his tiny, little hand .. exploring the contours of my face. With those tiny little fingers.

I suspect he was simply trying to determined who it was sleeping there beside him. (He had been going back-n-forth between his mom & his dad since well before his first birthday.)

Anyway, I felt his little hand explore my face, my scruffy face .. then he laid back down, and went back to sleep. =)

Words seem wholly inadequate to describe the feeling. Like nothing I had ever experienced. So precious was the feeling .. that I can still feel that little hand today. 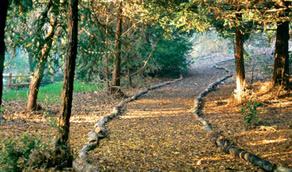 A Waking Smile in the Woods

I used to take the Bug to the Environmental Nature Center (ENC) there in Newport Beach .. because of the wonderful wooded feeling you get ..

.. which is difficult to find anywhere else in semi-arid Orange county without a considerable drive. It reminded me of Connecticut, where I grew up. [ For 150 meters, anyway. =) ]

When he was still very small I would carry him .. thru the wooded areas of the ENC. Eventually he would become drowsy as his nap time approached.

One time, I noticed he was already asleep. So instead of taking him all the way back home, and maybe waking him in the process .. I simply found a comfortable place to lie down just off the beaten trail.

2013.March.13 » Special treat for you today! Photos from a new dad. Peter is one of the many online acquaintances I met thru this site over the years. 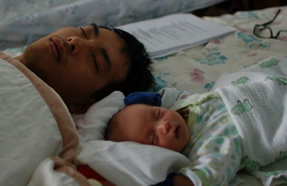 A New Dad with his Newborn Son!

He is a real (professional) programmer who has helped me write scripts (in Perl) to help manage the site.

Actually, I shouldnt take more credit than I deserve. Fact is, Peter wrote the scripts himself ..

.. and then helped me troubleshoot the minor bugs I encountered running it. =)

The power of these little scripts (barely a few kb) to leverage the features of the design-environment of the host program ..

.. and to do very many things nearly instantly .. things that would take a whole day (or more) to do by hand. It's like these scripts vibrate with power.

Before I actually run them, I triple-check to make sure everything is perfect. (More power means that mistakes are less forgiveable.)

See my note about the rise of MOOCs at the end of today's entry .. for a practical macro-example of the micro-pattern that I mention here.

The way that MOOCs use this leverage to multiply both ideas & knowledge .. with ultra-granular precision .. truly remarkable.

Most day-to-day computing insulates the power from you .. because the novice might unwittingly do much harm (quickly). But much power is available for the person who is willing to learn.

But first, yes, you have to learn the mojo. And the mojo is not the easiest thing to learn. It's almost another world, of sorts. Another way of thinking .. a very efficient way. 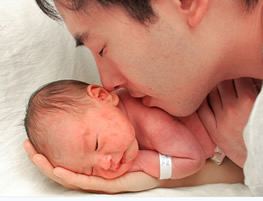 I was thinking about Peter recently cuz I hadnt heard from him in a while .. when I received word saying, "I'm a dad!"

Moreover he kindly gave me permission to share a couple of his most precious photos.

I was in a bit of a funk yesterday .. when I received his (personal) note with a link to the photos.

They seemed to miraculously cheer me up. See if they have the same effect on you:

I want to ask Peter if having a son and becoming a father changes any of his ideas about the way our nation is racking up an enormous national debt and leaving it for his son's generation to pay .. all for seemingly no good reason. 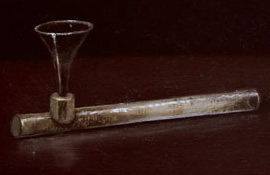 When will our leaders learn that using debt to artificially inflate asset prices always ends badly?

And when will they realize that taking on more debt to solve a problem that was created by too much debt ..

.. sounds frighteningly similar to what you might expect to hear coming out of the mouth of a crackhead?

Einstein says you can't fix a problem with the same [debt] thinking that was used to create it. (Cuz then you just have more of the same.)