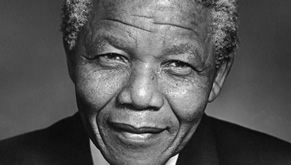 I mean, even Dostoevsky, the man who wrote the book on punishment (literally) ..

.. and who certainly knows his shit when it comes to suffering ..

.. even he only did 4 or 10 years, depending whether you consider his forced military service a form of incarceration.

Now if you gave me a choice, I would choose Robben Island over Siberia, sure. But not if it came with 30 years attached. Feel me?

"Siberia, here we come. Where's my ski parka? Pass the hot chocolate, comrade. Where do they keep the Jacuzzi? Shut the window, will ya? I feel a draft coming in."

That's why I put Mandela up there with Gandhi and the other greats. Of all time. Ever. (Or "ev-vuh," as they say in Brooklyn.)

Cite whatever history book you like. Declare your favorite century. Bring your champion. We will throw his ass in the slammer and come back in 30 years.

Oh, look! Vegas odds-makers are betting that your champion will be a broken man when we return in 2043. Drooling on a bib. Babbling incoherently.

Because thirty years in a cage is a long-ass time. (I did but a few days and already I was climbing the walls.) Still want to bring your boy? 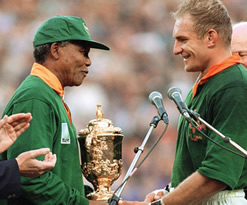 The flexing of his muscle. And the *way* he did it. Like he came from another planet. Another universe.

When I think of Nelson Mandela, I am reminded of what Peter said to Cornelius, the Roman centurion.

And also what the Psalmist said.

Let me quote for you from the eloquent Zakes Mda, who describes Mandela as » ".. the universally adored elder statesman who successfully resisted the megalomania that comes with deification."

How do you *do* that? How do you resist (successfully) the megalomania that comes with deification?

Do you first have to spend 28 or 30 years in prison? On Robben Island? Or get nailed to a tree? Maybe you need to read poetry in prison.

I took a lesson from Mr. Mandela and memorized Invictus before I went to jail (.. both times). I figured, "Hey, it worked for Mandela, right?"

Whatever the trick, the new pope seems to have figured it out. 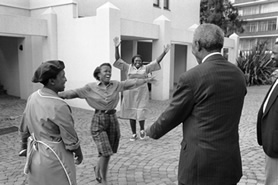 I love this photo .. because it shows the genuineness of their love for the man. Arms high and wide.

You reckon those gals might be glad to see him?

I find it interesting that Mandela's tribal forename [ Rolihlahla ] is colloquially translated » Troublemaker .. because Einstein could also be a rebellious shit. Definitely Tolstoy.

So was Jesus .. from what I can see. (Americans need to be more like Jesus. Because the money changers are at it again.)

If you are a regular, then you know that I resonate with many things that Mandela has said.

But none more strongly than » this. [ My friend Fyodor echoes a similar sentiment. ]

After you read these two quotes by Mandela .. go watch this video.

December 5th, by the way, the day Mandela died, was also the date Mandela was first arrested ('56).

I do what I consider my best writing .. when I am both inspired and out of my comfort zone. Mandela inspires me. And the 30 years he spent caged should make any compassionate person at least a little uncomfortable.

Did you hear that Pope Francis has been selected Time Magazine's Person of the Year? .. beating out my main man Edward Snowden by a hair.

I can almost hear young Edward talking to his father (on a secure line, of course), "Dad, if you gotta lose to somebody .. the Pope is not a bad person to lose to. Come on. Gimme a break. Even Putin is giving me shit ..

Sarah left suddenly for Germany soon as the announcement was made and Anna called to cancel our date to go see the Fabergé eggs. She said she was going with the Pope instead." =) 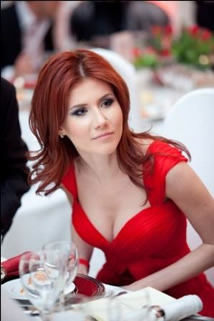 You must find the whole thing bordering on the bizarre at times, no?

Eugene calls you "smug and self-righteous". He must be seeing something that I'm not.

I am curious as to how you cope and maintain sanity during periods of emotional ebbing, which we all experience from time to time.

I just run the hill here .. until the physical pain overcomes the emotional pain. Or until I'm exhausted.

We do what we must to survive, no?

No, Edward Snowden is no Mandela. (Nor does he claim to be.) But he doesnt seem to be letting that stop him.

But yes, I do see similarities. They are both willing to endure discomfort, which many would call » extreme.

Their actions both say » "I am willing to go wherever .. to do whatever .. to get this shit done. To help right this wrong."

And actions speak louder. "Espionage? Okay .. if that's what you wanna call it."

I also feel that Mr. Snowden, like Mandela himself, shows remarkable restraint. I mean, that has been no-shit impressive. Very mature. Well beyond your years.

The only thing more impressive is the precision execution. I think everybody is still blown away by that.

The scale and scope. Breathtaking. And the competence .. among so many moving parts. You know. They are *still* scratching their heads .. trying to figure out wtf just happened.

[ I *told* you they are wizards. You should have listened. ] 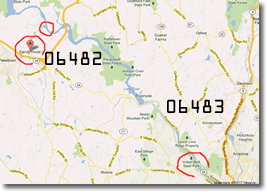 » Sandy Hook at One Year

I started with four. Now I have eight. I try to pick quotes that mean something to me personally.

If I am going to take the time to post a particular quote, then I am going to make it count. My next one may be from Mandela, since he has so many good ones.

The Newtown anniversary is 2 days away. I can tell that I am still not yet okay with that. I feel a sense of dread at the rapidly approaching date .. like I am trying to distract myself .. from the crushing anguish.

Because Newtown hit close to home .. in more ways than one.

I think of those parents sometimes .. and wonder how they get thru each day. And what do they do when it gets too hard? How many are on anxiety medication?

Nana says folks there are still very touchy. The tragedy lingers close. Nerves are jumpy when it comes to the kids at school. 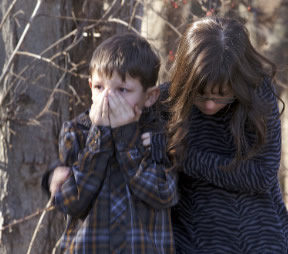 An SUV pulled into the lane marked clearly for Busses Only. Everybody held their breath for a moment. "Dear God, no."

The lady comes out from the school yelling, "What the hell is the matter with you? Can't you read?!"

This school, where Nana's grand-son goes, is "5 minutes away" .. from the new elementary school where the Sandy Hook students now go.

I remember being surprised last year, when Nana told me that her son (my cousin) had said, "They're gonna have to tear down that school, now."

At the time, it sounded both extreme and unlikely. But that it exactly what happened. Good for the kids, I think. (Bad for the taxpayers.)

When I asked Nana about her thoughts that no other state but Connecticut moved to modify gun laws, she surprised me by saying ..