2014.June.23 » Not long after I arrived in California [ San Clemente ] two cousins came out from the East coast to visit for a few weeks. They were not really my cousins, but rather one of them was married to my cousin (cousin-in-law?) and the other was her best friend. But I treated them like cousins anyway. 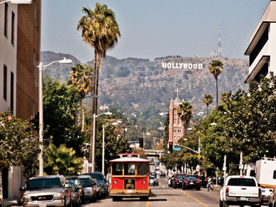 L'Wren & the Deceptive Pitfalls of Celebrity

And they were not really interested in seeing me, per se, but rather the area » southern California.

Hollywood, to be more precise.

They crashed in the living room .. on a plastic blow-up air mattress that I had left over. (Myself, I had since upgraded to a futon.)

In this particular apartment, the living room was upstairs and the bedrooms were downstairs (being cooler down there).

They kinda took over the living room. The upstairs. (You know how girls are.)

It was nice to have them. They were lots of fun. I had to work during that time, but I did my best to show them a good time. Especially on my days off.

One of the most memorable moments came at a gas station on PCH up in Malibu .. where they spied some hot girl gassing up her pink Corvette.

I had never even heard of this girl, but the girls were speechless. I mean, they were freaked out. Totally. You could tell that they were both beside themselves. For real. You cannot imagine.

A few minutes later and the girl (who was pretty hot, yes) finished filling her tank and drove off.

To be honest, I dont recall the name of the girl at the gas station. Guess I could call my cousin-in-law, but they have since divorced. (Actually, my cousin remarried and he divorced that girl, too.)

Here's my point » celebrity does not freak me out. Never has. Sure, I like to spot them .. but only because I can tell a friend » "Guess who I ran into today at the taco shop?" Or in the sauna.

I normally just let them be .. because you know they are constantly getting worked.