2014.November.27 » Happy Thanksgiving. Gobble, gobble. I went to Moores again yesterday. Normally I write about my experience ON THE DAY of the trip. Which is more difficult. More challenging. 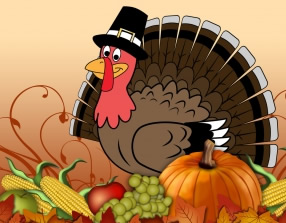 But waiting until today, being Thanksgiving, gives me the opportunity to share some observations about gratitude that I find interesting.

Plus it gives me 24 hours to reflect on the experience. Because there was a lot of information to absorb in a short time.

Yesterday was sort of an orientation or indoctrination for folks who are scheduled to receive radiation treatments.

A 1-hour class given by the lady WHO RUNS Moores. That would be » the Director. (With a capital 'D'.) She could easily have pawned this off on someone else .. being the busy person that she obviously is. But it speaks volumes (to a patient like me, anyway) when the head honcho herself welcomes you to her facility.

There is an unspoken subtext. Which goes something like this »

» "This is what we do here at Moores. Let me show you a little of what I mean .. because I realize it would be easy to overwhelm you with information at this point. But I want to give you a quick, general idea of the quality of care you can expect to receive while you are HERE WITH US at Moores. I think it will bring you a degree of comfort when you realize that .. nobody does cancer quite like we do. Ah! There I go again, bragging on my people. Shame on me. But it's hard not to brag on them. Let me briefly show you what I mean by that. Let me introduce my team to you. And if while I am introducing them to you and while I am outlining their (most remarkable) skill sets for you .. if you somehow get the impression that I am insanely proud of them .. well, uh .. that's because you're right. I am. Guilty as charged. But hear me out. There are reasons for this pride of mine. Many reasons, and all valid ones, too. For example ..." 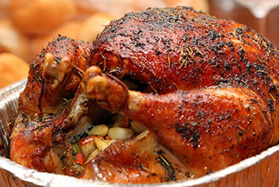 To be continued. Time to go eat some bird.

But wait 'til you hear about these radiation machines. Linear accelerators. "Wow." (Times ten.)

They cost a few million dollars each. The size of Volkswagen's. So cool.

They spin around you as necessary. Truly awesome. Technologically speaking. I am so impressed that I can hardly stand it.

Dude, these machines are SO TECHNO COOL that .. even with cancer I had a boner.

There is a part of me that does not identify with the cancer .. and part of the way in which I deal with it (with the cancer, I mean) .. is to identify and recognize any and every POSITIVE thing that I can find. (And yes, there are many .. if you look. Tho yes, it can be difficult, at times, to look beyond the cancer. Sure. This I will not deny.)

2014.November.21 » Imagine taking a serious virus such as » smallpox and genetically engineering it so that it cannot attach itself (attenuated) to healthy cells, but rather so that it can only attach itself to specific types of cells, such as particular types of » cancer cells.

Think about that for a minute. Think about the level of skill and knowledge and technology required to craft such a thing. What a fascinating concept.

This is called » immunotherapy. Immunotherapy represents the future of oncology.

Smallpox has been around since 10,000 BC. The earliest physical evidence of it is probably the pustular rash on the mummified body of Pharaoh Ramses V of Egypt.

This is part of a clinical trial that I am eligible for .. with a genetically engineered virus that has been tested for 2½ years .. on 22 others. I will be #23.

When I heard that I would be #23, I thought of Jim Carrey, Miley and Michael Jordan. Yes, in that order. I also thought of » Hunstsman Sr.

[ The 34-page prospectus that she gave me says that they are looking for between 18 and 32 test subjects. The Clinical Trials girl said that they are going to quit at #24 and move onto something else. So one more after me.

I did not read the whole thing because it kinda freaks me out to read stuff like this. They have about 30 people working in clinical trials. The Radiation Oncologist is in charge of the trial. ]

2014.November.18 » I went to Moores again today. For a 'simulation scan'. This is where they drape a warm, wet mesh netting over your face and let it harden. Yes, it's a very different experience.

And this face-mask clips to the board that you're laying on. So it pulls taut across your face. So you dont move. When they shoot your head with radiation. Feel me?

It is not a death-mask, no. But I would be lying if I said the thought never passed thru my mind.

Like I said, I find myself employing humor when I am feeling stressed. And ..

.. these people (a girl and her guy-helper) they are super meticulous about setting up this thing on your face, and also for the pillow (mold) that they are also making for you.

After a while of them making endless tiny adjustments, I said » "You guys are so meticulous. If it were me, I'd just throw a burlap sack over their face and spray it with a little Elmer's glue. Budget cuts. You know."

I had them laughing.

"So stop your whining, you big baby. We'll hose you off after we're done. Dont worry .. Elmer's is not toxic. But try not to swallow any of it when it drips thru the burlap. Oh, it looks like the hot water is out again, so we'll have to hose you off with cold water. What do you mean there's a piece of potato on your face. Where do you think I got that burlap bag from? And you're lucky that you're getting burlap .. you shoulda seen what we did to the last guy who was here. You should be glad I like potatoes."

Once I get into a groove on a theme, there's no stopping me. I almost killed a man once .. by making him laugh so hard .. that he couldnt breathe. He was begging for mercy.

No, I did not say all of that to them .. but that is the direction I was headed.

2014.November.13 » The Radiation Oncologist called yesterday to say that our previous conversation about perhaps forgo'ing radiation & chemo would probably be revised (.. uh, to include both radiation & chemo).

So naturally I was bummed to see my dreams evaporate .. my dreams of getting this thing cut out and finally being done with this 4-month 'adventure' ..

.. even if it meant somebody cutting open my neck.

My emotional rollercoaster took another sudden, steep plunge. "Look out below." Big splash.

"You guys are the experts," I said, trying not to sound dejected. "Whatever you feel is the best route to proceed, I'm totally with you."

"My colleague, the head-n-neck surgeon who you are seeing tomorrow," he added, "he will probably want to want to » verify the pathology." 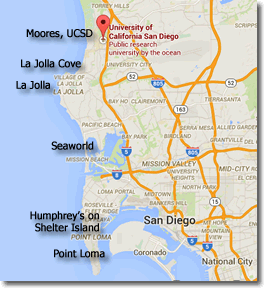 And yes, today I again went down to Moores .. this time to see the "Surgical Oncologist".

And yes, he did indeed want to » verify the pathology.

Dude, let me tell you what "verify the pathology" means. It means that they are going to re-biopsy the tumor (swollen lymph node in your neck) ..

.. by sticking needles into it (repeatedly) and sucking out the juicy-juice that you are growing in there. No, they do not call it 'juice' .. but you catch my drift. Your own special sauce. Home grown carcinoma.

So I am warning you .. that I am feeling a little spaced out. Not as bad as after the chunks-of-flesh biopsy, no .. but I can definitely feel myself nicely whacked.