2013.May.23 » The electronics revolution [.. a vital precursor to our own digital revolution of non-physical, non-atomic bits-n-bytes ] .. began with the invention of the triode vacuum tube in 1906 .. about the same time that Einsten discovered E=mc2 .. and some three years after George Orwell was born. 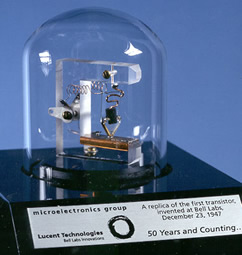 Big Brother vs the First Amendment

The solid-state transistor [ widely recognized as one of the greatest inventions of the 20th century ..

.. and an even more vital precursor to our digital revolution ] was invented in 1947 ..

So George was there .. when it began. In other words, he was in position to see it coming. (Certainly he could feel it coming.)

You may be interested, by the way, to learn that today's processors from Intel contain 2.5 billion transistors ..

.. while graphics chips from nVidia contain 7 billion transistors. And you can be certain that tomorrow's processors will contain even more.

Speaking of vacuum tubes and the solid-state transistor .. I had a friend growing up who purchased an old, used tube-based McIntosh receiver.

[ His real name was Bob, but his Italian skin was such a dark shade of olive that everybody called him 'Julio' { 'WHOO-lee-oh } .. a popular Puerto Rican name. "Hey, Julio!" ]

McIntosh receivers [ not to be confused with the Macintosh computer, which we will touch upon later ] were never very stylish, but they still manufacturer some of the world's finest consumer audio electronics gear.

Julio cut off the metal top of his retro receiver and replaced it with a plexiglass cover .. so you could look down into the electronic guts and see the TUBES glowing.

It took a minute to warm up but produced remarkable audio fidelity. Very cool, specially for the vintage audiophile. 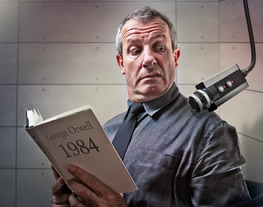 George Orwell's novel Nineteen Eighty-Four (pub 1949) and his novella Animal Farm (1945) together "have sold more copies than any two books by any other 20th-century author."

Nineteen Eighty-Four is ranked #13 on Modern Library's list of the Hundred Greatest English Language Novels of the Twentieth Century. (Yes, of the entire century.) Animal Farm is ranked #31.

On the Reader's List, Nineteen Eighty-Four is ranked even higher at #6 and Animal Farm moves up eleven notches to #20.

» The CIA, the FBI, the NSA & Establishing Secure Communications

Moving on to more current issues .. do you remember six months ago, when David Petraeus, then director of the CIA .. was discovered by the FBI to be engaged in an extramarital affair with Paula Broadwell?

Now, you might think that the head of the CIA would know a thing or two about how to establish secure communications. 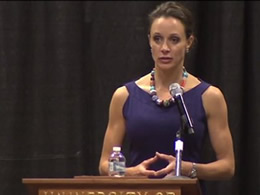 My understanding is that they opened a web-based email account together .. but never actually sent any mail to or from this account.

They merely saved their composed messages as drafts ..

.. and each secret lover read what the other had written by logging into the account and opening the drafts saved there.

"Meet me at the love shack at sunset. Bring snorkel gear and pretzels. We shouldnt need much more."

If you have more details, such as which email service they used, let me know.

It wasnt until Paula sent a nastigram to that socialite-lady in Florida [ .. "Find your own general, bitch. This one is mine. Don't make me unleash these baby pythons on your froufrou ass. Don't make me bust-open a can of military-grade whup-ass." ] ..

Whatever the gory details .. my point is » the Director of the Central Intelligence Agency was NOT ABLE to keep his most intimate and damning communications secure (private, confidential, secret, on the down-low).

I do not judge these people. No, sir. Who among us has not done scandalous things to our regret?

Honestly now, what 60-year-old man (general or otherwise) would not be absolutely thrilled (tickled pink) to discover that he is desired by a 39-year-old hard-body? ..

.. that he is found physically attractive .. by a former homecoming queen and valedictorian, no less? (Not just another pretty face.)

So we need to cut the General some slack. Have mercy. He's only human.

Paula was so attracted that she was willing to risk and put up her marriage .. as earnest of her flaring passions. (Guess we could say the same about David.)

Now, we also know that it was Paula who sent off the email(s) that led to the former general getting caught (.. with his 4-star fingers in Paula's impressively muscular cookiejar). A mitigating circumstance?